YieldTopia is a new protocol built from scratch that provides sustainable and profitable APY returns with extensions such as deflationary APY, referral programs, automated staking, and automated compound interest. Backed by a utility-driven ecosystem designed to scale. The difference between YieldTopia is the mechanism behind the protocol. In addition to the incredible APY starting at 42,069% (deflation APY), YieldTopia offers a variety of useful utility DApps designed to support the protocol.

YieldTopia was designed to be scalable and sustainable. YieldTopia is made possible by building an ecosystem around the protocol and its native token $ YIELD. It focuses on constantly adding value to the protocol and Yield Topians (community members), unlike other DeFi platforms such as Celsius, BlockFi and Anchor Protocol. Green market. Within the ecosystem: $ USDY Stablecoin, $ YIELD Native Token, YieldNfts: NFT Marketplace, YieldSwap: DEX, YieldPad: Launchpad, Governance Dashboard, and the futuristic YieldTopia Yield Protocol. 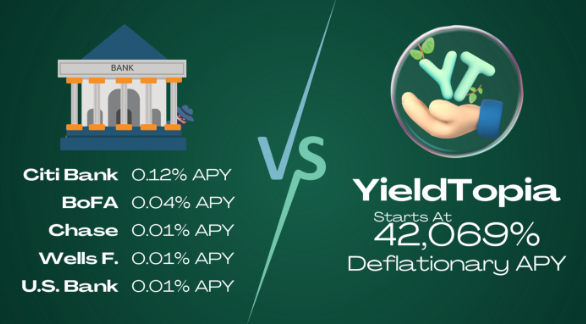 YieldTopia was created by crypto enthusiasts and financial professionals who understand economics and believe that people should profit from their own money, not banks. “We have a mission to create a safe and sustainable protocol that benefits investors,” said Mark, CEO of Yield Topia. YieldTopia has passed a security audit and core team KYC verification by an independent security company, InterFi (audit & KYC report). Details of YieldTopia and Traditional Banks: “APY of the top US banks or APY of YieldTopia — which is better? We do math and the results are shocking! — Click to confirm — YieldTopia.finance” ( Source: https: //docs.yieldtopia.finance/introduction/yieldtopia-vs-banks)

That’s not the only Yield Topia already offering a community. What really surprised us was the “Yield Topian Membership Card”. This is an exclusive NFT that gives selected community members special benefits to the entire ecosystem and its partners. When I learned about the benefits of a rare membership card, I wanted to get it right away for the following reasons: 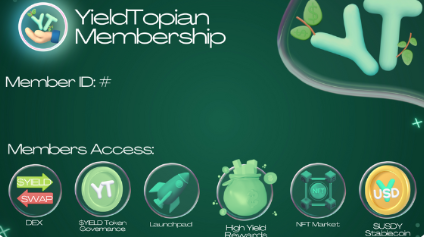 -YieldNFTs: No platform fees to buy or sell NFTs

-YieldSwap: There is no platform fee when exchanging tokens via YieldSwap

-YieldPad: No platform fees for participating in presales

Details of the YieldTopia ecosystem

$ YIELD is YieldTopia’s native token and the main token used throughout the ecosystem. All YieldTopia utilities are focused on benefiting $ YIELD and its owners. The incredible yield protocol known as YieldTopia requires investors to use $ YIELD to participate in staking and farming pools and generate high deflationary APY rewards given by $ YIELD. .. In addition, $ YIELD can be used for lending and borrowing, governance voting, liquidity provision, exchanges between popular cryptocurrencies, and simply earning some of YieldTopia’s profits to hold $ YIELD.

$ USDY is a decentralized stablecoin that is crypto pegged in a decentralized way using $ BUSD in a 1: 1 ratio. “$ BUSD is rated as the most reliable stablecoin in the crypto space, given that it is owned by Binance, the world’s largest crypto exchange. We agree with that statement. ”—Mark, CEO of Yield Topia, says. Holders of $ USDY can benefit from all of YieldTopia’s profits, including lending, borrowing and liquidity provision at YieldSwap. YieldTopian membership card holders have early access to $ USDY. 0% sales tax.

YieldTopia’s Swap is a branded decentralized exchange offered by YieldTopia. All platform fees collected will be sent to YieldTopia’s Liquidity Pool, Insurance Fund, and Treasury Fund to provide additional backing to the $ YIELD token. Platform fees are not charged to YieldTopian membership card holders.

YieldPad is a niche-focused lunch pad by Yield Topia. Its main goal is to list high quality Yield related projects that are safe and scrutinized by the Yield Topia team. Platform fees are not charged to YieldTopian membership card holders. 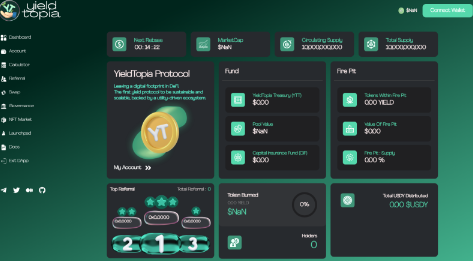 An important element of the mechanism

YieldTopia rewards holders with a deflationary APY starting at 42,069% annual interest. To make this sustainable, multiple features work together (as explained on the introductory page). This is achieved by a sophisticated rebase mechanism. All token holders receive a reward every 30 minutes and include automatic staking and automatic compound interest features. APY undergoes a deflationary process called halving, and every 30 days APY is reduced by 10% from the previous level, providing additional sustainability to the protocol.

Referral programs are Yield Topia’s way of providing communities with incentives to further disseminate information about ecosystems. For each successful referee, you will earn 1.5% of the referee’s buying and selling transactions and the referee will receive a lifetime 0.5% discount from the transaction tax. To get your own referral link: http: //app.yieldtopia.finance/referral

As you probably already know, new crypto assets are very beneficial to early adopters, especially in the early stages, but they can be exposed to “pump and dump” by bots and malicious traders. YieldTopia has a solution for that, and the team has created the ultimate protection against pumps and dumps, protecting all YieldTopian and their investments. There is a (hard-coded) anti-dump system implemented in the source code of the $ YIELD contract, which allows holders to sell between 5% and 20% per day. The sales allowance is determined based on the trading volume of the token at that particular point in time. To prevent traders from bypassing the ADP system, the $ YIELD contract disables wallet-to-wallet transfers. The community can adjust% by proposing new options through the Governance Dashboard.

The Capital Insurance Fund (CIF) is an important element supporting the APY system. CIF will acquire capital from a portion of Yield Topia’s dApps platform fee and a $ YIELD transaction tax of 3% (purchase) to 5% (sale). The team will use the insurance fund to buy back $ YIELD and burn those tokens to reduce the circulation supply and increase the value of $ YIELD.

The Treasury Fund acquires capital from a transaction tax of 3% (purchase) -4% (sale) for that purpose. This fund is dedicated to marketing, development, and other growth efforts. The uniqueness of how YieldTopia processes financial funds is that the community can choose how to allocate those funds using the Governance Dashboard. For example, if the owner thinks the X outlet should be paid for some kind of marketing promotion, they can simply make a suggestion, and if it passes, the team will act accordingly. !! The Treasury Fund is 100% dedicated to building and scaling Yield Topia. 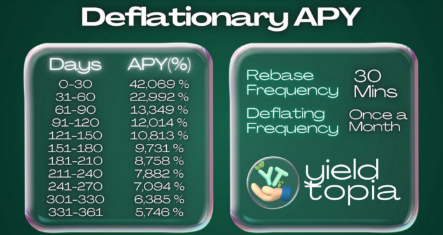 Near Protocol Collapses Despite Rounded Bottom, Is $6 Possible?

Ren Protocol Breaks Out, Is This Be A Relief Bounce?